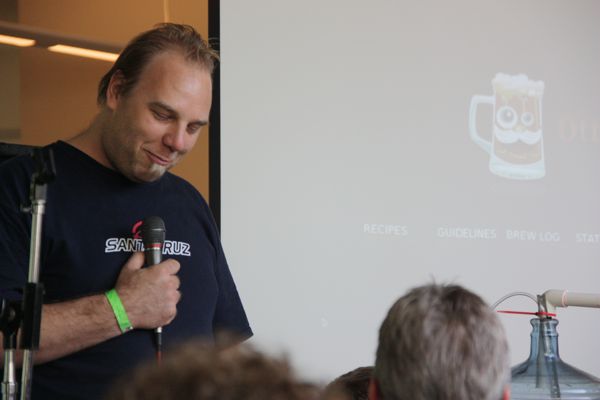 Last weekend I participated in a hack-a-thon event called Tech Raising in Santa Cruz. The idea is to make a 90 second pitch on an idea Friday night, and teams form to build a minimally viable demo by Sunday night. In my case, I was lucky enough to form a team from the fall 2010 session of Santa Cruz App Dev. Todd Schafer, a graphic designer who created the Santa Cruz Telecom logo, joined our team at the event. This is an amazing group of people. I knew we would work well together, but we had never had to meet a deadline like this before.

What did we build you ask? OttoBrew, a fully computerized small scale micro brewery. With no knowledge of beer brewing, and little direction, my team build an awesome web 2.0 interface to our brewery. We didn’t actually build a whole brewery, just the web interface, and a mockup fashioned from wood, deck screws, and duct tape. My job was to provide the spec, the background on brewing, and to build out the data acquisition and control system.

While I had no doubt we could build a worth while demo, my team exceeded my expectations. The crowd and the panel seemed to be impressed with what we accomplished.